Susan Boyle: There are no more fairy tales, especially in 2009

Susan Boyle, in a vote of U.K. viewers, lost her televised talent competition.

She will be starting a twelve-step group with Adam Lambert first thing Monday.

And she lost to these folks:

For one pretty small journalism class, its teacher left a fairly big mark

Looking back on what was a relatively small class that produced Grosse Pointe North's student paper, North Pointe, in addition to enabling us to have many extended lunches at Big Boy, Mr. Amberg oversaw and encouraged the creativity of some people that have turned out pretty well, including:

That was one staff.

As the debate over whether Kris Allen should've beaten Adam Lambert in the American Idol finale sputters to an end, I don't know which is sadder funnier: the revelation that Arkansans may have stuffed the ballot box to keep America safe from post-ironic, re-fried Ziggy Stardust moves (not that there's anything wrong with that), or that, according to the NYT, "[i]n Arkansas, [Idol sponsor AT&T reps] were invited to attend the local watch parties organized by the community. A few local employees brought a small number of demo phones with them and provided texting tutorials to those who were interested.”

Which means that those Arkansas residents had to be shown how to text.

My salvation from that show? My ability to gratuitously re-post the Kara DioGuardi / Bikini Girl duet:

Detroit: Economic and social devastation as a travel hot spot

The piece actually namechecks "Beyond Thunderdome."

Non Sequitur of the Day: Sometimes you just wanna blow stuff up. . . verbally, that is

Why didn't Michael Eisner ever greenlight a "Pollyanna" movie? 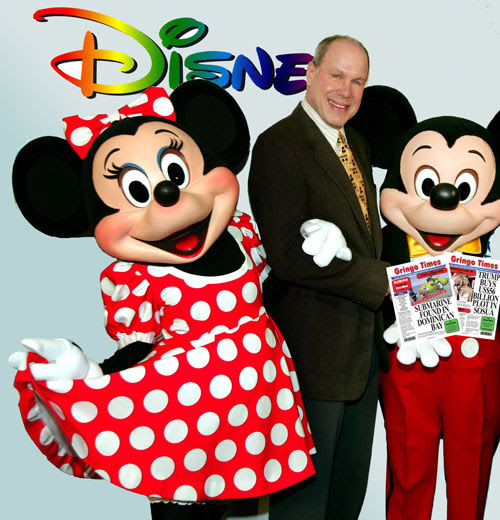 I enjoy Esquire magazine, especially its "What I've Learned" feature. Going through the magazine pile, I caught up with ex-Disney chief Michael Eisner's take in the April 2009 edition, wherein he opined:

The auto industry situation is incredibly complex, and it would be a little silly of me to try to reduce it. But you could say it was like the entertainment business. They didn't make movies that people wanted to see. They had the infrastructure, they had the technology, they had the manpower. They just didn't make vehicles that enough people wanted to buy. They ended up trying to protect their existing business and not concentrating on the future.

Why, yes, that was silly. That's all easy to say from a guy in a business where new product development is a fraction of that for car companies, outsourcing animation is a bit easier than outsourcing car parts, and the health insurance legacy costs of the car industry have proven to be an ultimately debilitating quirk of post-World War II history, because our country has never realized that the U.S. and China are the only car-making countries where the government does not acknowledge that being healthy is a citizen's human right.

I've thought from the beginning of the auto company assistance: if the Feds had offered to take every employee and retiree the Big Detroit 3 auto companies cover with health insurance, and move them over to Medicare or a new subsidiary of it, the carmakers probably would have jumped at that, it would've been cheaper, and it would've been a good base for moving forward on long-overdue national health care.

Penalty Killing as a Metaphor in Life

I proudly live in Detroit, where the economy is imploding, bigwigs gather annually in Mackinac to fiddle navel gaze meet to discuss solutions while the region burns, and hockey fans know enough to give a standing ovation to an ass-kicking penalty kill.

Darren Helms was the #1 star in last night's game, but he is a metaphor for what Detroit does best: persevere.

There is no such thing as "judicial activism," or "legislating from the bench." When judges act, they adjudicate objectively through the prisim of their personal legal philosophy, which creates a subjective result: by definition, courts must pick a winner.

On the other hand, when legislators act, they legislate. Similarly, judges' acts do, in fact, have repercussions, because they have to wade through the grey areas, or unclear language, or pandering unconstitutional provisions crafted by legislators who want to get re-elected by constituents who don't know any better than to buy into sound-bite buzzword catch phrases. And, yes, as Sonia Sotomayor said at a symposium (below), if appeals court judges do set "policy," it's because their written opinions have been followed to interpret the work of the above-described legislators since the beginning of the Republic.

She's a good nominee. Elections have consequeneces (though, some think not enough). I look forward to watching the Wingnut "culture war" get stirred up again, only to alienate the Hispanic electorate, and prove, yet again, how badly they are grasping at political and intellectual straws.

Lyric of the Day: New Wave Self Help Edition

And that's what gets results."

Reading up on the Blackhawks' recent whining / rationalizing, I noticed the Chicago Tribune has been using "Hawkey Town" as a play off [pun not intentional] the Red Wing's "Hockeytown." I can't find the logo header used amongst the editorial anymore -- perhaps they re-thought its propriety in light of the weekend's results -- but it is still available for irony-fueled wallpaper usage.
Posted by Lex Kuhne at 5/26/2009 10:36:00 AM No comments:

A Recommendation for your Memorial Day Weekend: Movement 09

Carrie Prejean: So Much Heat and Blather, So Little Light and Insight

I'm a bit late to the party -- for reasons to be discussed later.... always later -- but having had a friend successful in the pageant business, one thought has been nagging me about Carrie Prejean.

She has convinced herself and her new, nudity-tolerant Wingnut followers that she lost the Miss USA pageant because of the substance of her answer. But there were eleven judges other than Perez Hilton, and the one thing that struck me when the question was asked -- yes, we were watching -- was that she was horrible in how she answered the question. She looked totally unprepared for the question. For a refresher, I refer you back to my noticing a master at work -- VPILF Sarah Palin -- during the campaign.

For God's sake, you have to be in the Top 5 before the pageant even asks you to do anything other than look hot, and they do deserve re-assurance that you can handle a question in front of cameras and an audience

I sensed things were going to go bad fairly quickly, and on my Twitter in real time. Keith Olbermann had his take this week, which includes the pageant video:

Now, simply Googling "answer pageant questions" gets you this result, including these links to how-to tips here, here and here.

It's like when you fail a quiz you know that's coming, and then blame the quiz for existing.