There are good solutions to gambling problems, and some are better

The old joke is that one doesn't have a gambling problem, it's that the problem is losing while gambling. My good friend J. Chris Newberg has a good take on it:

Non Sequitur of the Day: You'll Be Sorry When I'm Dead Edition

"When nobody listens to a word I say."

Timekiller of the Day: The Joy of Bailing Out Lex

Other than a pro wrestler, one of the first actors to play Tarzan, the tattooed and pierced guy on Survivor and a bunch of young female soccer players, it's hard lonely out here for a pimp guy named Lex.

So at the urging of Miss Tessmacher, cheers to Funny or Die for showing so much sympathy to the (relatively) most successful of the Lex Club, Mr. Luthor:

As a lover of words, I'm always fascinated about how a usage suddenly shows up in our language, seemingly out of the blue. "Going forward," "surge," "re-double" and "double down," the list is endless.

So in watching the NCAA tournament this past week, I was intrigued by the sudden and very common use of a word when referring to the progression of the bracket: "chalk," which apparently suggests just going along with the favorites. Which, to a great degree, is what has happened with the Sweet Sixteen.

It's not "Rock Chalk Jayhawk."

You have been warned.

Cheers to the Bart Simpson Chalkboard Generator for the top graphic (and just for fun, here's Bart's chalkboard archive and Top 10 gags).

And, now, some slightly relevant video:

Canada's great, but another reason is that their money's money

We Americans can't even be bothered with spending one dollar coins or two dollar bills, but how many people would treat a New York Yankees coin like it was radioactive?

"Maggie May," by the Pogues:

Email ThisBlogThis!Share to TwitterShare to FacebookShare to Pinterest
Tags: slacking, The Internets, the pogues, videos 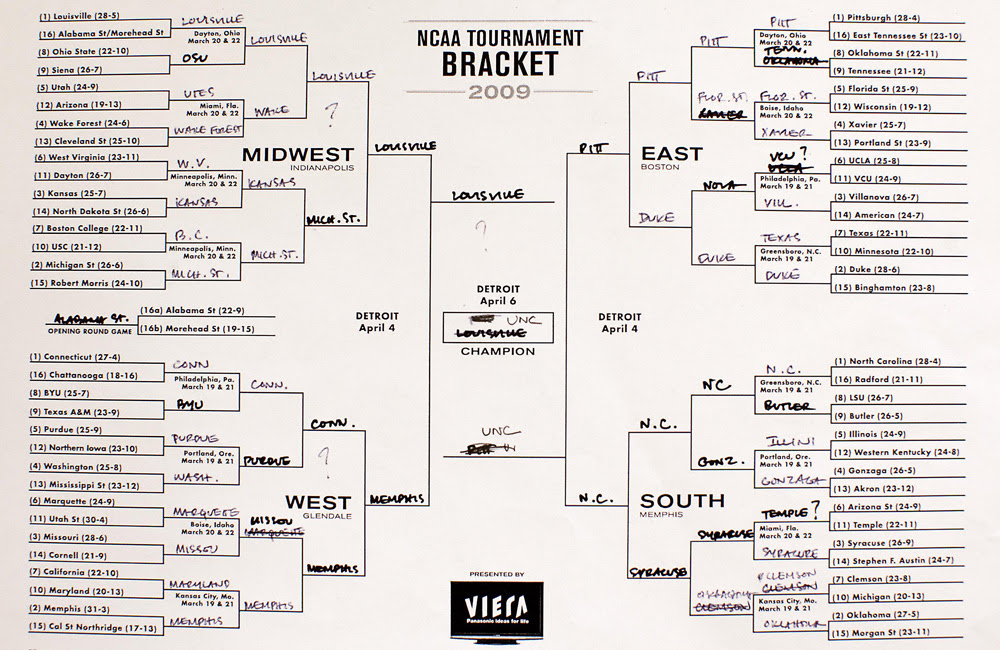 I'm sure it's been figured out amongst the parties, but the NCAA using that phrase is arguably a trademark violation, y'know.

And how cool is it that the President did a bracket? Hell, that's one more than I've done.

I was too busy St. Patrick's Day to post this joke, but it won't work next year (I hope)

Apparently, at the New York City St. Patrick's Day parade, when a St. Patrick character walked down the street, instead of snakes slithering into the Hudson River, taking their place were bonused AIG executives.
Posted by Lex Kuhne at 3/19/2009 10:06:00 AM No comments:

W's going to need a lot of computers, since he keeps jamming crayons into the drive doors

Did the news that W got a book deal prompt Crayola stock to spike? Because I'm thinking they're going to need an awful lot of crayons to publish that thing.

"Out here in the fields /
I fight for my meals /
I get my back into my living."

A nice Dropkick Murphys live cover of the Who:

If Batista had thought of this, Castro would've never had a chance

The U.S. has undertaken a loosening of restrictions on Americans' interactions with Cuba.

First, perhaps the Democrats being able to win Florida in a presidential election gives them comfort they can pull the new policy off without alienating the vibrant and passionate aging and shrinking due to death anti-Castro Cuban emigre population.

Two, Canada's had a rational Cuban policy for a long time and they seem to be doing fine with it.

Three, the way to just finish the job of getting the mob back to its rightful place running Habana casinos? Airdrop the equivalent of hundreds of malls' contents on the island, and sell the exclusive marketing rights in each product category to whichever company wants to get the initial foothold in the market.

Pop, computers, clothes, whatever. Get some retail sales going.

Think of it as a Caribbean stimulus package.

The first Octo-mom joke, other than, you know, Octo-mom herself New on breakfast menus: the OctoMom Omelette. It has 14 eggs, no sausage and the party at the next table gets to pay for it.

What exactly does Detroit have in common with Bozeman, Mr. Russian Smartypants? 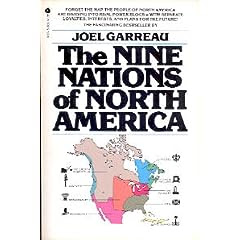 Russian foreign policy strategist Igor Panarin has predicted that the U.S. will break up into rump states next year.

We may have problems in America, but that is definitely a WTF theory.

But, it's also not a new theory: check out this wiki describing this fine 1981 book (at left) by this author.

As has already been noted on The Internets, including by the insightful author, WaPo reporter Joel Garreau, Panarin has no sense of American regionalism, of where our lines naturally lie.

So, he's either clueless, a political hack, or just channeling Britain in the Middle East, c. WWI.

When it comes to working, color ain't nothing but a pigment

Michigan is one of the darkest states. (With apologies to Monica and Barbara Rose.)

"I needed money cause I had none /

I fought the law and the law won."

NHL Realignment: Scouts v. Blues Would Be Just As Good as Royals v. the Cards (An OT Post)

One of my favorite blogs, Uni Watch, shared a neat link about the past (and future) of the NHL in Kansas City, where I have a bunch of hockey-lovin' and playin' relatives. (This Saturday, go Chip!)

The Kansas City Scouts joined the league with the Capitals, but then ended up moving to become the Colorado Rockies (bringing the mountain west Don Cherry and "Rock and Roll, Part 2"), and then turning into the New Jersey Devils. It has a nice new arena waiting for a major league tenant, and it continues to be used as leverage for any NHL or NBA team angling for new digs, just like Tampa Bay's domed stadium was for more almost two decades prior to getting the Rays via expansion.

Which is all a roundabout way to saying that the NHL needs to get smart to better compete for the shrinking North American entertainment dollar. To that end, number one is re-alignment, which I've goofed around with for a long time before this article took it on.

I don't do fantasy sports, so, y'know, give me a break.

Travel expenses must be reduced, rivalries intensified, and league-wide exposure increased. So, I propose: go to four divisions (which I have optimized for regional rivalries, though Buffalo tortures me), play each team not in your division home and home, and play the rest of your games against your division.

In the playoffs, you have to play out of your division and, just to throw in a few extra playoff gates, have seeds 4 and 5 do a home-and-home total goal playoff, like soccer. And, just for fun, forget the conferences and rotate the divisions in the last two rounds, like the NCAA basketball tournament. Ever since the league had the Stanley Cup Playoff logo with "west" on the right and "east" on the left, I've sensed that NHL's conferences were, perhaps, false distinctions.

The odds of this happening? Slim to none.

The ability to post this because I have this little soapbox? Total and absolute.

James Scott was crazy, Coleman (MFIC) Young was obnoxious, but the collective insane bloc of the Detroit City Council took the cake today. While fending off the ravenous hordes of no suburban whites determined to loot the city of its "jewels" who don't care enough about the city to want anything, they took time from from manning the barricade to serenade their sycophants with "Onward Christian Soldiers," as they prepare to save Cobo Hall from a deal that gives the city millions of dollars for a dilapidated conference center and veto over its future operations.

From McCain's strategy in the stretch run of running for President, to the U.S. expansion in Afghanistan, to Rush Limbaugh continuing to act in a treasonous fashion (based on his standards during the last administration), I worry about the implicit suggestion that our politics exist on the same cultural and moral plane as blackjack.