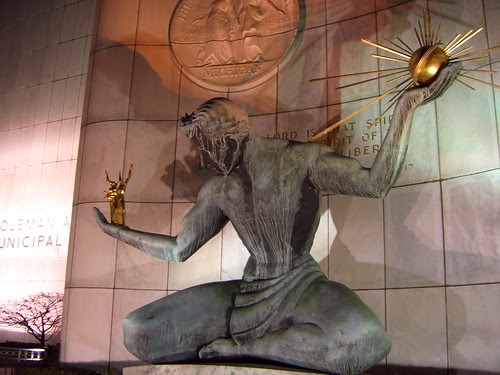 The ass-kicking Anthony Bourdain filmed in Detroit this week for his series, "No Reservations." Though The D will be only one of three cities in an unfortunately-named, in a highly-cliched fashion, "Rust Belt" episode, any Detroit visibility on television other than the Lions, Kwame and animal control cannot hurt. Thanks for coming, Tony, but, really, we know you could've done a whole hour on us.

Second, while some people accuse Mitch Albom of sappiness for his non-fiction writing, that's never really bugged me. Me, I occasionally sense he phones in his column, but when you work for a place that lives to phone it in, how can that be avoidable? Yet, on a bigger stage this week, he writes bigger, approaching the heights he is capable of, with his piece this week in Sports Illustrated, "The Courage of Detroit." Even though some of our local sports positives are overlooked in order to make his Comeback Kid meme work, it puts a face on a problem region that is easily dismissed as a faceless, "just Detroit."

Seriously. If you want to judge our city like this dumbass, at least take the time to do some research and thinking. But then, really, why let the facts get in the way of an opinion, eh?
Posted by Lex Kuhne at 1/10/2009 10:34:00 PM