Chomp on This, Gator Bitches 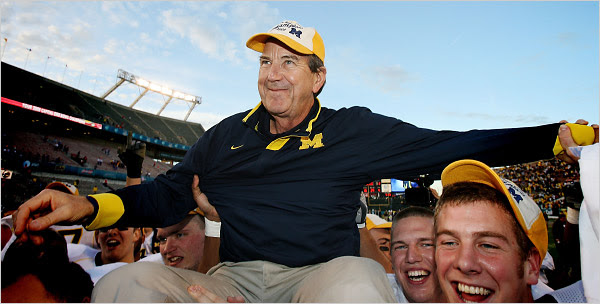 Admittedly, I was worried about Florida, too. The ESPN poll had, like, 91% of the online voters picking the Gators in what was essentially a road game for U-M. And, yes, this was a healthy Michigan team that lost their first two games with various degrees of ignominy. Yet, an experienced, (FINALLY!) healthy Wolverine team was able to deliver in the Capital One Bowl when it needed to make a statement for history, one I'm sure they think more accurate and relevant than App State. Take away the two turnovers at the goal line, there could have been an extra 21-point swing to Michigan. Yet, watching today's Wolverine offense makes me wonder what such potent offensive abandon, applied season-long would have yielded for this team. Despite his regularly annoying underachieving, Lloyd Carr's bowl record against the "awesome" SEC? 5-2. Go Blue.
Posted by Lex Kuhne at 1/01/2008 09:36:00 PM