It Takes a Village to Turn Eight Innocent Babies into Pariahs 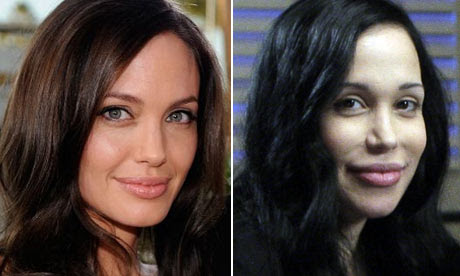 I have a theory that I like to run by anti-choicers, which is: if it's God's will which ordains that no life, whatever its stage of development, be aborted, is it then not also God's will for a woman who is unable to conceive to stay that way, and contrary to His will to use artificial means to become pregnant? Though the result might be a bit harsh if an anti-choicer remains consistent, and if it is what it is, and science and medicine shouldn't mess around with the miracle of life, then, logically, it should cut both ways.

That being said, the schadenfreude on Octomom is becoming scary and unfortunate. There's all sorts of incompetent and/or psycho parents out there, and in any given neighborhood, there are probably anywhere between zero and 14 kids at risk from the stupidity of their parents. The only difference here is the density of their location and the fact that Octomom (who may well be an Angelina Jolie-ish half bubble off plum) and Octogram can't seem to stop searching for closure online before these kids' lives have really even opened.

Let's just get those kids raised well, in spite of the family.