If you vote for the baseball HOF, vote Alan Trammell 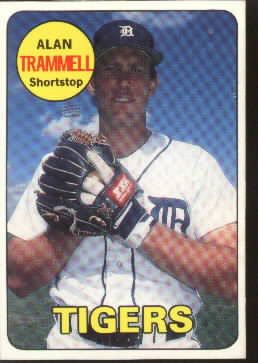 This year's ballot for the Baseball Hall of Fame has been released. There are no first-ballot slam dunks like in the past few years, though I have never understood how first-ballot entry is somehow better than getting in later. Being a shameless Detroit homer, but also with a strong sense of justice, I cannot understand how the '84 Tigers have no one in the Hall of Fame. They were a dominant team of that era, and if how a player stacks up against his peers in their era is an indicator of Hall-worthiness, Trammell, Jack Morris and Lou Whittaker all should be in. Other than Ripken, which of their contemporaries is better? Sweet Lou got the ziggy after only one ballot, and while Morris is still on the list, his career-long penchant for telling sportswriters to screw off has understandably hurt his chances. But lots of folks think Trammell is an all-time Top 10 shortstop, except those who vote. Really, would HOF SS Ozzie Smith, with comparable defense and lesser offense, be in if he wasn't a good interview who did snappy round-offs going to his position? And should the fact that sportswriters remember Bubba as easy column fodder better than Trammell's great career in a lesser market keep Trammell -- as well as, hopefully, his two teammates -- from getting a HOF ticket punched?
Posted by Lex Kuhne at 11/26/2007 10:30:00 PM

I can see him getting in by the veterans committe someday. The issue is, he isnt east coast...and the local reporters bascially suck.

Get Mitch Albom to really push it, and then there would be a chance.

He deserves to be in without question.